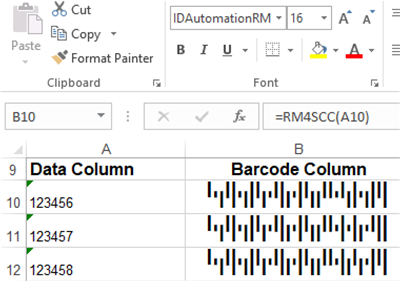 The USPS Intelligent Mail (IMb) is a similar barcode type used in the USA. IDAutomation offers several products that support IMb; however, IMb support is not provided in this font package.

The Royal Mail 4-State customer barcode, also known as RM4SCC, was created for automated mail sorting processes and is normally used to print the postcode and Delivery Point Suffix (DPS) on letters in a machine-readable format in England and the United Kingdom. Royal Mail fonts also implement KIX codes as used by the Dutch PTT for bulk mail addressing. 4-State RM4SCC barcodes are also used in several other places including Singapore, Australia, and the Netherlands. The RM4SCC barcode symbology is based on 36 symbols representing alphanumeric characters (0-9, A-Z), as well as start and stop bar characters which are represented by "(" and ")".

When generating a single barcode, consider using the Online Barcode Font Encoder to encode your data.