Self-Checking Barcode Fonts such as Code 39 (for numbers and/or uppercase letters) and Codabar (for numbers only) are the easiest to use in Numbers when encoding numbers and/or uppercase letters. Self-checking barcode fonts have built-in checking code so that it is not required to calculate a check character. These self-checking fonts may be printed or generated as a calculated field in Numbers easily. The following tutorial demonstrates how this is accomplished: 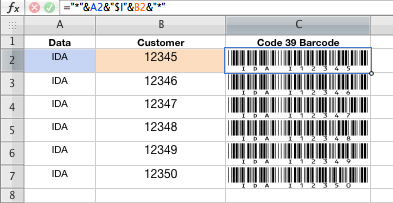 Creating a Column of Barcodes in a Spreadsheet

IDAutomation barcode fonts provide an easy method of barcoding a column in Numbers. Code 3 of 9 barcodes are created in a Numbers spreadsheet in this example, with the IDAutomationC39 font that is included in the Code 39 Barcode Font Package. Codabar Fonts may also be used to create smaller bar codes when using numbers only. To use fonts other than Codabar and Code 39 on the Mac platform, refer to IDAutomation's Barcode Integration Guide for Mac.