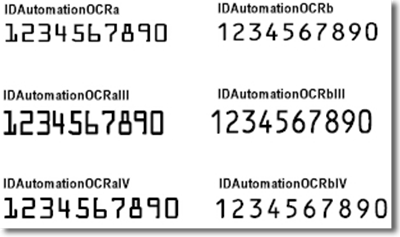 NOTE: Because the OCR Fonts are a high fraud item, all orders are subject to a manual approval process, which may delay the accessibility of the download link for this software.

ANSI & ISO Specifications are supported in the OCR-a and OCR-b character sets, and contain upper case and lower case letters, numbers, and several special characters including the Euro symbol.

OCR-b Compatibility is achieved across current specifications with the curved-end font design. The OCR-b software fonts were created from ANSI INCITS 49-1975 (R2002), formerly ANSI X3.49-1975 (R2000) in agreement with the revised IS0 R 1073 standard.

IDAutomation's OCR Font Advantage Package software includes TrueType, OpenType, several PCL versions and PostScript versions of the OCR fonts. PostScript OCR fonts may be used for Unix systems and may be downloaded directly to PostScript printers. Binary and ASCII versions of PostScript are also provided. TrueType OCR fonts are supplied in Windows and Mac format and are compatible with Mac OS X and all versions of Microsoft Windows, including Windows 10 and 11. There are a variety of other IDAutomation font types and versions included as well.

Font Names Used Prior to July 2003