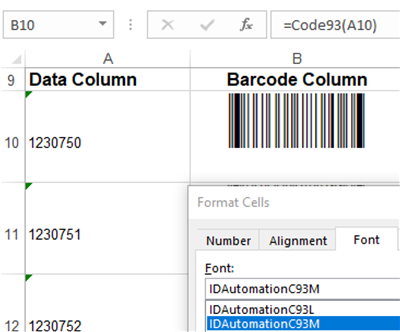 All Code 93 Fonts require special formatting so that the data, when the barcode font is applied, will be scannable. Several font encoder tools, macros and plug-ins are provided to complete this automatically in a variety of applications.

The symbology of the Code 93 character set consists of barcode symbols representing characters 0-9, A-Z, the space character, and the following symbols: /, + , %, - , . , $. Code 93 was designed to provide a barcode with both higher density and security than the Code 39 barcode. Code 93 is a higher density barcode and it requires two checksums to be calculated. These two checksums have been known to auto-correct minor scan read errors that may exist in linear symbols.

Many encoders are available for easy Code 93 font integration into a variety of applications including:

TrueType and OpenType fonts in the package are digitally signed for security purposes.

When the Code 93 barcode font is selected, the space character will not produce a barcode but a space. To print the barcode symbol representing a space, it will be necessary to type or print the equal character ( = ) instead of a space character or use the font encoder tools above to perform an automatic conversion.

Code 93 was developed according to AIM, ANSI and European EN 800 standards.