This tutorial is designed for IBM Notes and IBM Domino users. Using the Notes barcode tutorial, IDAutomation's barcode fonts, and LotusScript functions can easily be integrated into IBM applications. 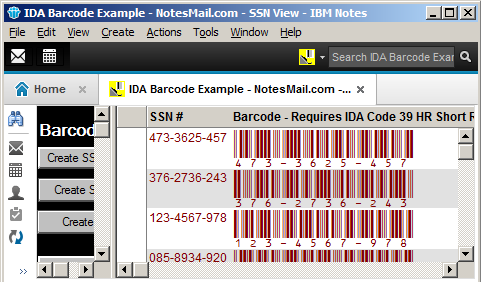 The appropriate barcode font must be installed as specified in the field before the IBM application can properly generate barcodes for display or printing. The IBM Notes download package database was created in Lotus Notes 4.x, but is compatible up through IBM Notes 9 Social Edition. The Code 39 barcode fields in this database are calculated for display because they are the easiest to format. IBM Notes barcodes can be created from data fields using the following methods.

This is by far the easiest method for creating barcodes in IBM Notes, and the self-checking fonts available to use are Code39, Codabar and Industrial Code 2 of 5. To display a barcode, simply create a field computed for display that combines the start and stop characters with the field. For instance, for Code39, the field formula would be: "*" + DataField + "*"

Choose the barcode font of choice for the field and make sure it is centered in the box with some white space before and after the barcode. The resulting barcode should return an accurate scan.

Using LotusScript to Generate Barcodes in IBM Notes and Domino

This method is recommended for advanced developers of IBM Notes or Domino applications. Code 128 and other more complicated barcodes require a LotusScript event and a LotusScript function. See the Lotus script in the barcode database example for an illustration of how to implement these barcodes. In this database example, the LotusScript code that formats the Code 128 field is located in the form's QuerySave Event. In this example, the LotusScript for the function that formats the text to the barcode font is Code128b. This script is located in the form's Globals definition and must be imported from IDAutomation's LotusScript Functions file.

Import the LotusScript Barcode Functions into the Form

Please note that some functions require other functions in order to work properly, and some require an additional argument. Every time the document is edited, the field will be updated. After the field is updated, it may be used on forms and in views with the appropriate barcode font selected.

Adding the LotusScript Source Code for the QuerySave Event

Choose the correct barcode font for the barcode field and make sure that it is centered in the box with some white space before and after the barcode.

These functions are supplied in the IDAutomationLS.lss file, which is provided in the LotusScript download package. If needed, the IDAutomationLS.lss file may be imported into Domino Designer as a Shared Script Library. For all functions, the DataToEncode is the string data type. Other data types such as numbers or dates may need to be converted to the string data type for proper encoding.

All parameters are required. For example, use Code128("123456", 0, 1) instead of Code128("123456"). For all number symbologies such as Postnet and UPC, dashes or spaces may be input for easier readability. These characters will be filtered out by the function before the barcode is generated. For UPC-A, UPC-E & EAN-13, the +2 and +5 add-on codes may be created by adding the data to the end of the string.

Barcode functions may be imported into the shared script library. For example, in Domino Designer 7 perform the following: