Code 128 Barcode Fonts encode numbers, symbols, uppercase and lowercase text as well as functions such as returns and tabs. All Code 128 barcode fonts require a start character, checksum character, and a stop character to create readable barcodes. Due to the required calculation of a checksum, implementation of Code 128 as a barcode font may be difficult without IDAutomation's Font Encoder Tools.

Three different start characters are used in Code 128 barcodes to tell the barcode reader, which character set is being used. The table below illustrates the three character sets in columns with the location of the characters. In the columns A, B and C, is the list of characters or functions that the barcode scanner will read for the associated symbol. The columns ASCII, Char and Unicode are unique to IDAutomation's Code 128 Barcode Fonts. These columns designate the location in either ASCII or Unicode where the barcode symbol for the character resides in the font. The Char column lists the character that resides at the ASCII location, which can be used to print the corresponding symbol. The character set provides easy methods of encoding functions in barcodes such as returns and tabs.

* It is necessary to print the Code 128 barcode space character from ASCII 194 instead of ASCII 32 because Windows cannot print a symbol instead of a space character from Visual Basic and most other development environments. Mac systems should print the Code128 barcode font from Unicode locations if possible because the extended characters map to different character than what is displayed on the "Char" column in Mac Roman encoding.

* If the system regional setting is not set to "English" or the 1252 Latin-1 code page, the Code 128 fonts support the following additional code pages in Windows: 1250 European, 1251 Cyrillic, 1253 Greek, 1254 Turkish, 1255 Hebrew and 1256 Arabic. If compatibility is necessary with any operating system, code page and locale, IDAutomation offers the Universal Barcode Font Package which creates Code 128 and many other barcode types from a single font.

* The columns ASCII, Char and Unicode are unique to IDAutomation's Code 128 Barcode Fonts. 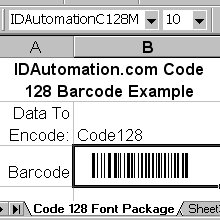 IDAutomation provides font encoders and source code samples that are free to use with IDAutomation fonts, which will automatically format the start, stop and check characters to the barcode fonts. Therefore, manual check digit calculations are usually not necessary.

Calculating Code 128 Character Set A or B

The following table is an example of how to obtain the check character for the data "biz" using Code 128 character set B.

To print extended ASCII characters from a keyboard that does not have the keys defined, use the ALT+<xxxx> key combination where xxxx equals the character's ASCII location in 4 digits. For example, to type ASCII character 104 into Microsoft Word, select the font in Word, press the ALT key and while holding it down type 0104 on the keypad of the keyboard. Four digits must be entered with the keypad only.

The following table is an example of how to obtain the check character for "667390" using Code 128 character set C:

First, interleave the numbers into pairs and then choose the appropriate character that represents the number pair from the Code 128 Character Set.

It is possible to switch between character sets in a single Code 128 barcode. Although character set B can encode text and numbers, it may be necessary to switch to set A to encode a function such as a tab or carriage return.

The following table is an example of how to encode the data "biz" using Code 128 character set B with a switch to character set A for a carriage return function:

This type of switching between character sets is also compatible with the free font encoder tools. For example, specify the data bizÉm (É is the switch to set A and m is the function according to the chart) as the input for the Code 128 B function, the data ÌbizÉmDÎ would be returned, which would perform the switch to set A and the function of a return when printed with IDAutomation's font and scanned by a barcode scanner.

Therefore, the following text is needed to create the barcode from the font: ÍÊÂ,BÊ/,AÎ

The X dimension (X is the width of the narrow bar) is listed below for various point sizes in millimeters and mils. 1 mil is equal to 1/1000 of an inch. IDAutomation's Code 128 barcode fonts have been specially designed to be able to produce dependable barcodes when printed at large and small point sizes. The Code 128 font may be printed as small as 4 points if the scanner is capable reading it. The Code 128 fonts are reliably read with the IDAutomation USB Barcode Scanner at point sizes of 6 to 48 points.

When using a printer with less than 600 DPI, print at the following point sizes to create accurate barcodes:

Eighteen different versions of the Code 128 barcode fonts are provided to support human readable versions and different width and height requirements. Fonts with the letter "H" in the font name are human-readable versions. The last characters in the Code 128 barcode font name determine the height of the barcode with the shortest being "XXS" and the tallest being "XXL". Because each single font may be printed at various point sizes, there are several combinations of heights and widths that may be produced. TrueType fonts with symbol encoding are also provided, which allow the font name to be more visible in font drop down lists of end-user Windows applications and are signified with the letter “Y” or the word "Symbol" in the font name. The N Dimension column in the chart below is the narrow bar width to height ratio.

Free lifetime Level 1 support may be obtained by reviewing the knowledgebase articles that are documented and by searching resolved public forum threads or the Code-128 tag. One incident of Level 2 support for a period of 60 days is included with the purchase of any license. Level 2 support and upgrades may be provided beyond 60 days if the Level 2 Support and Upgrade Subscription is purchased when making the or