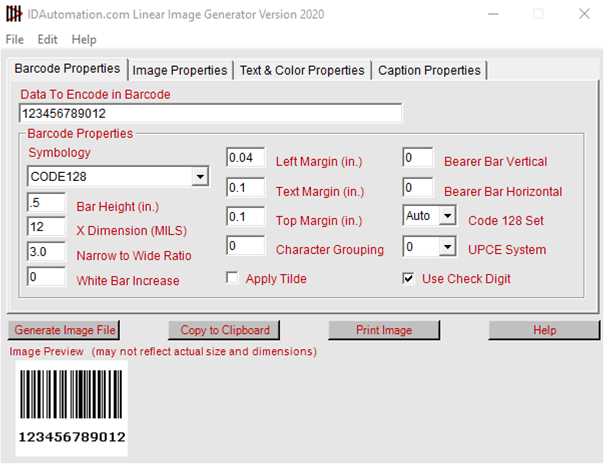 If it is necessary to create barcode labels (instead of image files), IDAutomation recommends the Barcode Label Software, which generates labels dynamically from incremented fields, lists or a database.

The Windows version is compatible with any Windows operating system that includes the Microsoft .NET Framework 1.1 or greater including Windows 2000, XP, Windows 7, 8 and 10.

The Mac version is compatible with any OS X version that includes Java 1.6 or greater.

Installation on a Network Drive for Multiple Windows Users:

Saving and Loading the Settings XML File (Starting with 2010 Version):

Generating and Saving an Image File:

Creating Multiple Barcodes from a Text File (Starting with 2011 Version):

Creating Image Files from the Command Line or DOS Prompt:

The most common properties that need to be changed are the Barcode Symbology, X Dimension, Bar Height and the DataToEncode.

Free product support may be obtained by reviewing the knowledgebase articles that are documented below and by searching resolved public forum threads. Priority phone, email and forum support is provided up to 30 days after purchase. Additional priority phone, email and forum support may be obtained if the Priority Support and Upgrade Subscription is active.